Most of us will spend the weekend grilling burgers and visiting with relatives, or lounging on a beach somewhere, or watching a baseball game in an opulent stadium, overpriced beer and hot dog in hand. And most of us will have forgotten the meaning of the day.

So when you partake in your Memorial Day festivities this weekend, try to remember a few things.

If you have bemoaned the layoffs of friends and co-workers in the recent economic crisis, think of the Navy SEAL who lost every single one of his teammates on a rainy night in Kunar Province, Afghanistan.

Bring your children along, and explain to them why. It’s important.

2011-05-27
ambulancedriverfiles
Previous: Nurses: Not So Different From Us After All
Next: Still Trending Down… 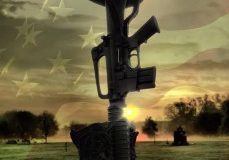