Two Steps Forward, One Step Back

After much speculation, the American Heart Association released the 2010 ECC Guidelines last week.

And like past versions of the guidelines, there are some good things, and some recommendations that leave one scratching his head, wondering what dark, smelly orifice they pulled that idea from.

This year, it appears that AHA is afraid of the big, bad Nitroglyerin Boogeyman, too.

Either that, or they think that EMS providers are a bunch of booger eating morons incapable of utilizing Nitro safely, but are afraid to just come right out and say it. You’ve already read my view on the subject.

This if my fifth version of the guidelines to teach. I’ve taught and coordinated over 350 ACLS and PALS classes (I quit counting in 2006), a couple dozen instructor courses, and done God only knows how many CPR courses, instructor updates, monitoring and mentoring.

And in those 17 years spent doing this, I have come to believe two things:

1. Despite the stated emphasis on evidence-based medicine (and it strengthens with every new release), some recommendations make it into the guidelines based on no evidence whatsoever.

2. Somewhere in a dark basement at AHA headquarters, there is a little troll named Melvin whose job is to write stupid test questions and come up with ludicrous recommendations. Melvin wrote the test questions about Milrinone for the PALS course, and the oxyhemoglobin dissociation curve a couple of ACLS versions ago, and the Grand Prize Winner of stupid questions, whose correct answer required that providers turn off all oxygen delivery devices before defibrillating.

Just because you see something in an ACLS book doesn’t necessarily make it valid, folks.

2010-10-23
ambulancedriverfiles
Previous: Ever Noticed…
Next: What’s Good for the Goose… 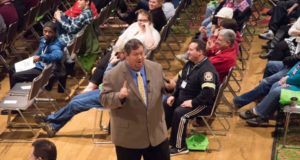